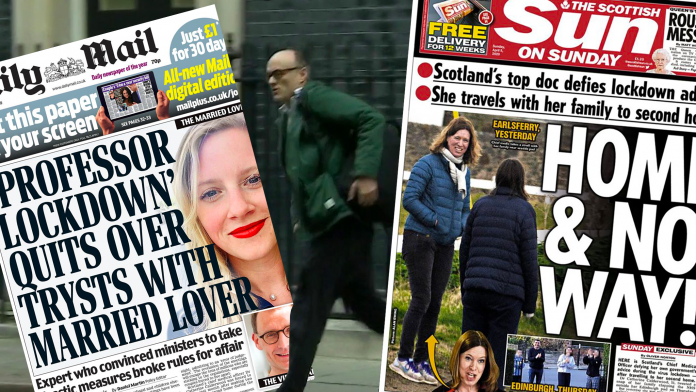 Political writer Ivo Peart reviews strange goings-on at the heart of government in the first of his new columns for DOCUMENT.

Chief adviser Dominic Cummings knows that alumni of the pre-2020 Remoaner elite – in their millions – are salivating at the prospect of his fall. This does not, and perhaps need not, concern him. “It isn’t about what you guys think” was about the only honest statement issuing from government yesterday, and it came from the horse’s mouth.

What’s more worrying for him is that the Remoaners’ view of his actions is widely shared outside the Westminster bubble. The government’s core electoral proposition is that it is on the side of the people against an out-of-touch liberal elite. That does not sit comfortably with evidence that the rules which the prime minister has frequently praised millions for observing at great personal sacrifice, those rules do not apply to government insiders. Dominic Cummings was wrong to suggest that how this looks is not important.

Mary Wakefield thinks people “assume” Mr Cummings is not a kind man, but many who hold such a view speak from experience. Ask Sonia Khan, who was marched out of Downing Street by an overawed police officer on Mr Cummings’ instructions. As ERG stalwart Steve Baker has said, Dominic Cummings holds in contempt any individual or institution that seeks to hold him to account, and when contempt is the default tool in your Snap-On chest, you can find yourself in situations where you lack the empathy and emotional intelligence to understand how people feel.

After the story broke, a parade of ministers was lined up to defend the chief adviser, all focusing on the contention that the Cummings family travelled to make sure that appropriate childcare was available for their four-year-old child. Michael Gove: “Caring for your wife and child is not a crime”. Rishi Sunak: “Taking care of your wife and young child is justifiable and reasonable”. Matt Hancock: “It was entirely right for Dom Cummings to find childcare for his toddler, when both he and his wife were getting ill.” Suella Braverman: “Protecting one’s family is what any good parent does”.

But according to their own account, the child was not looked after by others, whether grandparents or aunt, during lockdown. Far from it. Mary Wakefield writes that he was in with them, administering Ribena in doctor’s dressing up clothes. The role of family, Downing Street subsequently fudged, was limited to leaving supplies at the door while the chief adviser and his family were self-isolating “in a separate property”. So what was the purpose of the 264-mile journey, transporting the virus to the other end of the country at a time when at least Mary Wakefield was already ill? Is it credible to suggest that no-one could have left supplies on the doorstep at the family home in the capital, which it turns out constituted the childcare that made it reasonable and lawful for Dominic Cummings to break the rule followed by millions that says you can’t travel to second home or family to self-isolate?

This defence is surely wafer-thin. In the Spectator account Mary Wakefield may now wish she had never written, she relates how after the “uncertainty” of the bug, the family “emerged from quarantine into the almost comical uncertainty of London lockdown”. Really? Not without first, again, travelling the length of the country. Irrelevant to the story or, as the late Robert Armstrong would say, economical with the actualité? It appears the Cummings-Wakefields were more concerned with “how it looks” than they are letting on.

People who chose not to travel, but to stay put and self-isolate with their children in line with what at the time were considered clear rules – in many cases with distressing consequences – are entitled to be angry that those rules did not apply to those who set them. The resignation of Neil Ferguson was meant to show the opposite, but he was never part of the political elite. No ministers were trotted out to suggest that as he was very likely immune at the time, meeting his lover was an entirely reasonable and indeed necessary act to sustain a man who was working day and night to keep the nation safe. Far from it: on that occasion Matt Hancock was “left speechless”. The story broke in that bastion of investigative journalism, The Daily Telegraph, on the day the UK reported the world’s highest death toll from coronavirus. It was the best of days to bury bad news and many suspected Downing Street fingerprints. To them it seems Mr Cummings can dish it out, but has trouble taking it when the tables are turned.

The planned rebuttal disseminated by the ever-reliable Laura Kuensberg and her colleague Mishal Husain – vulnerable child, reasonable and lawful, nothing to see here (what price access?) – was followed by bluster – “You guys are probably as right about that as you are about Brexit, remember how right you were?” – and the hapless Grant Shapps drawing the shortest of short straws, as Sophy Ridge put it, and holding a vanishingly thin line.

The government saw in the decade seemingly invincible, with an impregnable 85-seat majority, confident that uncompromising Cummings-style entrenchment would deliver advantageous terms with the EU, free trade with the rest of the world and a strong economy to shore up its recently conquered Northern red wall. Then COVID-19 arrived and it is fair to say the Johnson administration has not so far had a good war, late to abandon mass gatherings, flirting with herd immunity, releasing patients into care homes without testing, serially failing to fulfil commitments to supply protective equipment, flaunting newly-created temporary hospitals which they had no staff to run, failing to introduce testing and tracing at the scale of many other countries and manipulating data to suggest that key milestones for testing were being met.

Labour leader Keir Starmer has been widely praised for forensically filleting Mr Johnson at eerily sober and courtroom-style PMQs, and indeed he did impress in comparison with the preceding era. But it is also true that the government provided him with numerous open goals which even a more skillful and better-prepared prime minister would have been hard pressed to defend.

Now Jacob Rees-Mogg is cancelling remote working for MPs and summoning them to Westminster “to set an example” at a time when many people are going back to work. But the advice is that only those who cannot work from home should travel to work. As we have all seen, MPs do not fall into that category, so is this instruction not itself against the new rules?

The government is rattled and attempting to regain the initiative. It feels it will be better able to do this with baying hordes of loyal backbenchers and social proximity of Whips to MPs. Mr Rees-Mogg’s edicts are not designed to address parliament’s ability to function, but the government’s.

For the prime minister and his cabinet fixer Mr Gove it is not a convenient time to lose the man on whom they rely to exercise political control over the machinery of government, but as Steve Baker has said, they are burning through political capital at an unacceptable rate – not just with MPs, but with millions of ordinary citizens of all persuasions.

The prime minister, while expressing support through others, has maintained a strict personal silence. What will he do?

A YouGov poll yesterday reported that 52% of respondents thought Mr Cummings should resign. So far, Boris Johnson is choosing to stick with the 48.

In these days immediately following the mindless attack at Manchester Arena, it is impossible to write about anything Mancunian except in...
Read more
Architecture

The railway arches at Mayfield, a stone’s throw from Piccadilly Station, is what all of Manchester was like when Urban Splash...
Read more
Cities

Punk sprang up all around me in Manchester, seemingly in answer to questions I was already beginning to pose in early...
Read more
Culture

She may not have given Henry VIII the male heir he thought so important but, apart from giving birth to arguably...
Read more
Culture

UK Borders: a line in the sand

The sound of Celia Stothard fills the room at 19 Cleaver Street in Kennington, transporting me to years precociously spent in...
Read more

https://vimeo.com/420111140 Covid-19 Threads is a series of short films presenting twitter posts that have appeared with...
Read more
Communities

https://vimeo.com/417007603 Covid-19 Threads is a series of short films presenting twitter posts that have appeared with...
Read more