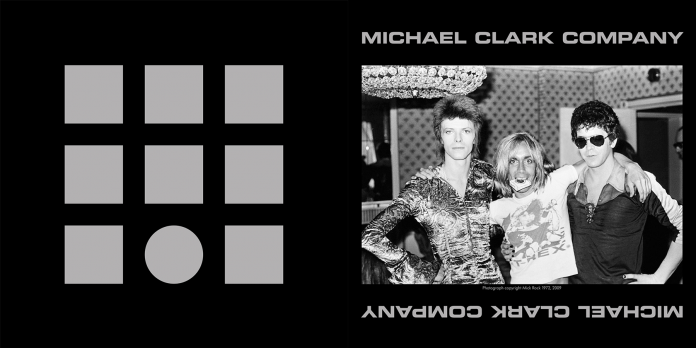 On 4 and 5 May, the designer Malcolm Garrett was invited to take over the Michael Clark Company Instagram account to present a selection of his record sleeve designs to celebrate his collaboration with Michael over many decades.

As a complement he picked nine songs from those records as a Coronavirus Lockdown playlist over the two days, reproduced here with Malcolm’s notes. The songs explore themes of loneliness, boredom, transience, life and death; each musing in its own way on the very nature of existence. Collaboration has been a recurring theme through Malcolm’s career, as highlighted in his notes.

Scroll to the bottom and click on the playlist coming : being: going to listen while you read!

I have worked with Michael Clark since first designing a poster for the Because We Must Christmas Show with Leigh Bowery at London’s Sadlers Wells in 1986. This selection of designs and songs celebrates the continued collaboration, most especially since Michael became Artistic Associate at The Barbican in 2005, working closely with him and the Company producing programmes, posters and marketing materials for the annual Barbican performances and subsequent touring shows.

During the enforced coronavirus lockdown Patrick Shier at the Michael Clark Company invited me to share some of my record sleeve designs with their social media audience in a two-day takeover of the @michaelclarkco Instagram page. This took place on Monday 4 and Tuesday 5 May 2020.

The sleeves are almost chronologically presented, and in the order they were posted over the two day period, but with the Michael Clark Company image posted mid-way through. In most cases both the front and the reverse of the sleeve are presented side by side.

Not content with simply supplying visuals of the sleeves, I am naturally compelled to supplement the choices, which span my whole career as record sleeve designer, with the songs in this playlist. I’ve selected singles and album tracks which have a poignancy that is relevant to the situation we find ourselves in.

A classic Pete Shelley song of unrequited love, loneliness and ultimate despair. My design for the sleeve, with its depiction of empty rooms, only one of which is occupied, aims to capture a feeling of being alone at home, unable to reach out to the one you love.

This was only the fifth sleeve I designed for Buzzcocks, all of which had been produced before I graduated from Manchester Polytechnic in 1978. It was the start of a working relationship that continued until Pete Shelley sadly died in 2018.

Stuck at home? What better opportunity is there to annoy the neighbours with some ‘punk rock electric guitar’. Proof that boredom and suburban isolation can become an environment for creative inspiration.

The lo-fi television illustration is cut out to reveal a completely transparent vinyl disc, effectively becoming the blank empty screen through which the suburban subject matter of both the sleeve and the song are seen.

Taken from what many consider to be Magazine’s finest album, this Howard Devoto song is inspired by the psychological novels of Dostoevsky. My former flatmate, the guitarist John McGeoch, and bass player Barry Adamson (whose playing was once described as ‘the definitive business’) are both at their absolute best here.

The album sleeve, screenprinted on the reverse of the otherwise white board to achieve a crude cardboard finish, remains one of my favourites.

The final track on the album RIO, which has what is by far my best known sleeve design. I’d already worked with Duran Duran for well over a year when this second album, packed with hits, was released. The track I’ve chosen captures the band at their most beguiling, with Simon LeBon at his vocal best.

The RIO sleeve features a specially commissioned illustration by American artist Patrick Nagel, which I displayed wrapping from front to back around the open edge of the sleeve. The record is literally accessed through the image by the very act of removing it from the sleeve.

The face that launched a thousand other sleeve designers, as I have been repeatedly told in the 38 years since its release. And I have seen many fabulous parodies too.

The photograph on the reverse is a segment of a photo of Simon LeBon which also featured in the magazine New Sounds New Styles, edited by my creative partner Kasper de Graaf.

It’s a record sleeve but not for an actual record. The programme for Michael Clark Company’s 2009 performance of Come, Been and Gone was housed in this pastiche sleeve.

Michael’s choreography featured music by many of his heroes, including David Bowie, Lou Reed and Iggy Pop depicted in this image by Mick Rock.

In the original photo another person could be seen behind the three figures, but I carefully retouched the image to hide him from view.

With styling by my friend and former flatmate Judy Blame capturing the rebel punk spirit, the photograph features a defiant looking Boy George, caught at what would sadly transpire to be an unhealthy period in his life. He is wearing post-Vivienne Westwood bondage clothing from the shop BOY, customised with newspaper clippings and headlines.

The typography on the sleeve, also cut and pasted from printed sources, is distressed using fax and photocopier in a similarly post-punk manner. The lettering for Sold on the sleeve for the single is directly modified from Jamie Reid’s infamous Sex Pistols logo.

Working with George was never less than an amazing, entertaining, inspirational experience. He was never short of ideas and enthusiasm for life and for the people around him. Great to work with photographs styled by Judy too.

The images shown are not the front and rear of the LP, but a twin set of the fronts of the two companion sleeves for single and album, both entitled SOLD.

Although this was Simple Minds’ fourth album, Sons and Fascination was the first to feature the members of the band on the front cover.

This was an adventurous collaboration with photographer Sheila Rock, shooting on large format Polaroid in the middle of the night at New Covent Garden flower market. Jim Kerr and his childhood friend, the guitarist Charlie Burchill populate the photographs in an almost subliminal way, appearing like extras in a movie still, rather than starring in them.

They emerge from the shadows both photographically and metaphorically, as this album saw the beginnings of a career trajectory that took Jim and Charlie on to the global success they enjoy right up until today.

This is one my most played albums from that time. Such spacious sound, too big to fit one disc, was released with a fabulous companion Sister Feelings Call making it almost an actual double album. To this day I wonder why they were released separately.

Just one highlight in forty years of working with great friends Martyn Ware and Glenn Gregory. A joy to work with, Heaven 17 are an essential inclusion for this lockdown takeover of @michaelclarkco Instagram.

Glenn’s voice just gets better and better with the passing of time. Don’t Fear The Reaper is not a Heaven 17 original, of course, but it seems the right choice for this lockdown takeover.

On this sleeve from 2005 I particularly like the optical distortions that create the ‘before’ and ‘after’ images that won’t stay still the more you try and focus on them. A wholly unintentional visual reference can also be made to New York’s twin towers and their unfortunate before and after fate.

The image on the left is not the rear of the record sleeve but an update of my Heaven 17 logo to mark the band’s current project, delayed by the lockdown. I am excited by the prospect of joining ‘The Heaven Seventeen’ on stage projecting images for songs from the first two Human League albums, Reproduction and Travelogue, in live performance as they did in 1979.

It will end but our atoms live on. This is my most recent sleeve design and the final post on my lockdown takeover of @michaelclarkco Instagram. It is the sleeve for a special 12” remix of the Orbital track for which Brian Cox provided the voice over, and which subsequently featured in his Universal world tour in 2019.

Designed with my collaborator of many years, Alasdair Scott, it features an image created by Gia Milinovich, which shows the effect of a magnetic field on iron filings. Magnetism is one of the universal mysteries of science.

Malcolm Garretthttps://www.malcolmgarrett.com/
Malcolm Garrett is a founding partner and creative director of design consultancy Images&Co. He is one of Britain’s best known music designers, with a career spanning four decades, from punk to digital download. In the 1980s he built up one of the first design studios in Shoreditch with creative partner Kasper de Graaf, and in the 1990s one of the first digital agencies there with Alasdair Scott. He is a co-founder and artistic director of the annual Design Manchester festival. The first Royal Designer in ‘new media’, Malcolm is a past Master of the Faculty of Royal Designers and represents the faculty on the Sir Misha Black Awards Committee for excellence in design education.

The Northern Powerhouse Mk III is just around the corner, but how will it compare with its predecessors? The...
Read more
Culture

Safe Space, a new art workshop programme for older or vulnerable adults and carers designed “for lockdown and beyond” is launching...
Read more
Design

In 1957, the historian A.J.P. Taylor wrote in the New York Times that “Manchester is the only English city which can...
Read more
Politics

This paper was written to introduce the Policy Seminar on Public Mapping Data of the Institute of Urban Information.
Read more
Design

Presentation delivered at a Close & Remote symposium on secure cities at Deptford Lounge in south-east London on May 9, 2013.
Read more
Politics

UK Borders: a line in the sand