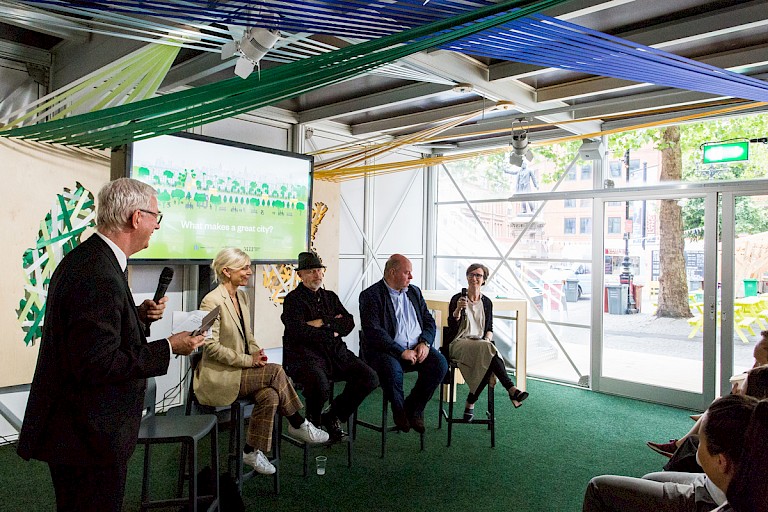 On 9 July 2019, I had the pleasure of chairing a panel and audience discussion at a well attended Manchester International Festival (MIF) breakfast event in the MIF Glass House next to Manchester Town Hall. The topic, ‘What Makes A Great City’, drew an audience of city planners, architects and other designers to see presentations from the panel and engage in the debate.

On almost all liveable city indices culture scores highly, and MIF’s MD Christine Cort spoke about the festival’s proactive programme of taking culture into the community. Something else MIF is known for – exporting original work to perform all over the world – helped create international awareness of the great city Manchester is.

Seeing what is already great about a city before you start doing new things is a key factor, said Urban Splash CEO and MIF chair Tom Bloxham. He pointed to Manchester’s first unsuccessful bid to host the Olympics, mounted in 1984 under the leadership of Cornerhouse founder Bob Scott, as the starting point for Manchester’s successful regeneration as a city in recent decades.

The diversity of the city region and its radical heritage were highlighted by Eamonn Boylan, chief executive of the Greater Manchester Combined Authority. To make a city great it was important also to know in what areas it can be truly world class and not try to be great at everything. This is why advanced materials and health innovation, identified in the GM Independent Prosperity Review as world class strengths, are at the heart of the recently launched Local Industrial Strategy.

There was a lively audience discussion which continued after the event. ‘What Makes A Great City’ was organised at MIF by Levitt Bernstein and sponsored by Trowers & Hamlins.

This article was first published by Images&Co.

Safe Space, a new art workshop programme for older or vulnerable adults and carers designed “for lockdown and beyond” is launching...
Read more
- Advertisment -

The sound of Celia Stothard fills the room at 19 Cleaver Street in Kennington, transporting me to years precociously spent in...
Read more
Design

These personal reflections on cultural regeneration, place and memory expand on a presentation Thea made at Design Manchester's Liveable Cities conference...
Read more

We’ve been mesmerized by the COVID-19 pandemic for months. New problems have become apparent, but the old ones have not gone...
Read more
Culture

https://vimeo.com/414228008 Covid-19 Threads is a series of short films presenting twitter posts that have appeared with...
Read more
Innovation

SouthBank IQ is a research study and consultation document by Images&Co that evaluates the potential for innovation-led growth in South London. The...
Read more
Design