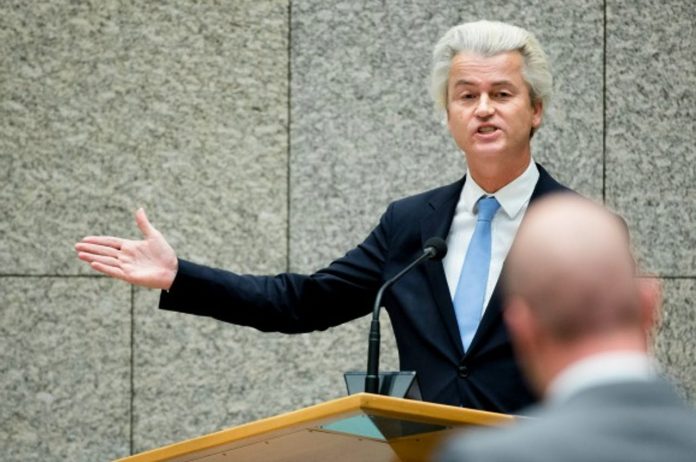 The Dutch this weekend are conducting the kind of horsetrading held up by Tory newspapers before Britain’s election last month to scare us off a hung parliament. In the event, the UK quickly formed a coalition government that’s markedly more harmonious than its one-party predecessor, and if the LibDems achieved one thing, it was to show that hung need not mean stymied.

In Holland however, the maths following this week’s general election is less straightforward, and the situation is lent added spice by the fact that the two big winners are the straightlaced centre-right Liberals (VVD) and the rather less savoury far right Freedom Party (PVV) led by Geert Wilders, 46, the man who was barred from Britain by then Home Secretary Jacqui Smith as a threat to public safety.

Wilders fought the election on immigration and law & order. He’s best known for saying the Koran should be banned and calling Islam a religion of hate. Not far removed, perhaps, from the British National Party, who suffered a wipe-out in Britain last month.

Yet here we are, contemplating a government in progressive Holland that may include this man.

The process of coalition building has been at the heart of the Dutch system of proportional representation for generations. In the Netherlands, the record is that government has generally been stable and accepted as representative, but odd outcomes are often on the cards. Following this week’s election, the 150 seats in the new Tweede Kamer are divided among ten parties. The smallest, with 1.3% of the vote and two seats, is animal rights group Partij voor de Dieren. Next up, with 1.7% and also two seats is the orthodox religious SGP, currently Holland’s oldest political party (its even older religious competitors having long ago merged into the Christian Democrats) which advocates theocracy and condemns homosexuality, abortion and prostitution. Charmingly, the SGP began its 90-year history in 1918 by campaigning for women not to use their recently acquired voting rights. For all Holland’s deserved reputation for tolerance, it’s worth remembering that it has always had a strong, illiberal streak of Calvinism too.

The ChristenUnie, a more progressive religious group that sat in the previous coalition with Labour and the Christian Democrats, got five seats for its 3.3% of the vote, with Green Left and the progressive liberal D66 on 10 seats each (6.7% and 6.9%), and the red-blooded Socialist Party on 15 with 9.8%. These are attractive blocks for coalition building and all could play a significant part in the coming weeks.

This leaves the four big hitters at the top. The Christian Democrats (CDA), who in one guise or another have formed part of most governing coalitions since the war, were beaten into fourth place (21 seats, 13.6%) by the Freedom Party, which almost tripled its representation to a staggering 24 seats from 9, with 15.5% of the vote, inflicting a significant defeat on outgoing Christian Democrat prime minister Jan Peter Balkenende, who has led Holland since 2002. Labour dropped three seats to 30 (19.6%), doing slightly worse than expected under the former mayor of Amsterdam, Job Cohen, and in the No. 1 spot, the Liberals have 31 seats with 21.5% of the vote.

This then is the current will of the Dutch people. But what can we make with such ingredients? That is the question now facing Queen Beatrix, who plays the central role in the well-choreographed process of government formation. A majority government requires the backing of at least 76 MPs, in this case no fewer than three parties. The Queen takes soundings from constitutional experts and party leaders before appointing an informateur to investigate realistic options. When a sound basis for coalition has been established (this may take several informateurs over weeks or even months), she appoints a formateur, who then has the chance to form a government and become prime minister.

At this early stage the initiative lies not with the abrasive Mr Wilders but with the moderate conservative classical music teacher Mark Rutte, 44, leader of the Liberal Party. Nevertheless an accommodation with Mr Wilders is by common consent the first option to be explored. Mr Rutte will not at this stage express any preferences but believes that as the biggest winner – the biggest message from the electorate – the Freedom Party must play a major role in the first round of investigation; a view echoed not only by Mr Wilders himself, who wants to explore a Liberal/Freedom Party/Christian Democrat coalition, but even by Labour’s Mr Cohen, who acknowledges that the Liberals and the Freedom Party should be the first to be consulted.

Mr Wilders’ favoured option would only have a one-seat majority, but the small two-seat SGP has already offered support from the backbenches, adding weight to the social intolerance that would be one of the defining characteristics of such a government.

Liberal? Not very.
Freedom? For whom?
Christian? In the tribal sense, certainly.
Democrat? Indeed, if between them they accurately reflect the will of the Dutch people as expressed in this election.

But does it add up to liberal democracy, the hard-won prize that Mr Wilders and many of his supporters claim to be defending?

This dilemma has been at the heart of Dutch society since at least 1568, when William the Silent took up arms against Philip II of Spain to maintain ancient Dutch privileges, asserting the principle of ‘freedom of conviction’ against a monarch intent on stamping out heresy.

The tolerance and liberty personified by the father of the Dutch nation always sat uneasily alongside the competing religious dogmas of the age. William’s contemporary Elizabeth I of England famously declared that she had no desire to “make windows into men’s souls”, also using the idea of religious freedom as a means of containing social conflict. But the protestants in the Netherlands – as in England, Scotland, Germany and elsewhere – were often no less intolerant than their Catholic counterparts, and princes as well as preachers often found themselves on different sides of the argument depending on their interests at the time.

Nevertheless the foundation for Western liberal democracy had been laid and over the next 150 years power shifted from kings and nobles to merchants and parliaments (in 1688 William’s great-grandson found himself midwife to another seismic shift, the Glorious Revolution, with similarly blurred lines between the causes of liberty and religious conflict).

The core principle is representative government by the majority, balanced by the freedom of the individual. In Britain this tradition was embodied by the Whigs (the Tories being generally more supportive of the established authorities of king and church) and their descendants today, the Liberal Democrats. In the Netherlands the mantle is also held by the Liberals, whose name Volkspartij voor Vrijheid en Democratie literally means “the people’s party for freedom and democracy”.

The surge of support for a far right, anti-immigration, pro-law & order party in a country so wedded to its liberty may appear strange, but it highlights the dilemma for liberal democracy that has been growing across western Europe for some years. The Netherlands provided the first public platform for Ayaan Hirsi Ali, the Somali thinker and writer who is an outspoken critic of Islam and who herself was a Liberal MP in the Netherlands until she was accused of having broken immigration rules – a crisis that led to the fall of a previous Balkenende cabinet. Ali featured in a movie by filmmaker Theo van Gogh that was considered so offensive by Moroccan Islamist Mohammed Bouyeri that he assassinated the painter’s great-nephew as he was riding his bicycle in Amsterdam in 2004.

Holland is also the country where, two years earlier, the charismatic, populist politician Pim Fortuyn threatened an electoral upheaval until, in the midst of a general election campaign, he was himself assassinated, bizarrely by an animal rights activist. Fortuyn, who vehemently rejected any suggestion that he was a far right politician, called Islam a backward religion and said that, if he could, he would close Dutch borders to Muslims.

Dismissing these politicians as extremists is too simplistic to be of any help in finding a way of dealing with them.

For us in Britain it is equally important to look at what is going on. The BNP’s setback in last month’s election is no cause for complacency about the challenges to maintaining liberal democracy, threatened on one side by growing numbers of religious ‘conservatives’ of various hues promoting social intolerance, opposing gender equality and denouncing freedom of sexual orientation, and on the other by nationalists promoting supremacy of the indigenous culture and opposing religious freedom. The inconsistency in the Dutch Freedom Party’s argument in defence of traditional freedoms is demonstrated by the support of the SGP, the proponents of a Calvinist theocracy, who have no truck with western freedoms but strongly favour ‘Christian’ supremacy.

The new government is not yet formed, and there are numerous options that do not include the Freedom Party. The likelihood at this moment, however, is that there will be an EU government in the next month that includes the controversial Mr Wilders.

If there are ways in which our liberal values can be better protected than the ones he has on offer, we had better start mapping them out.

Twitter
Previous articleUK Borders: a line in the sand
Next articleAnne Boleyn: Mother of the Anglican Church

“When they're designing things in cities, local community people should be involved, because it is we that are actually going to...
Read more
Cities

Between the café and the lake right in the centre of Finsbury Park, 10 large A-frames present a preview exhibition of images...
Read more
Culture

We’ve been mesmerized by the COVID-19 pandemic for months. New problems have become apparent, but the old ones have not gone...
Read more
Architecture

The railway arches at Mayfield, a stone’s throw from Piccadilly Station, is what all of Manchester was like when Urban Splash...
Read more
Cities

In 1957, the historian A.J.P. Taylor wrote in the New York Times that “Manchester is the only English city which can...
Read more

https://vimeo.com/417007603 Covid-19 Threads is a series of short films presenting twitter posts that have appeared with...
Read more
Politics

Presentation delivered at a Close & Remote symposium on secure cities at Deptford Lounge in south-east London on May 9, 2013.
Read more
Cities